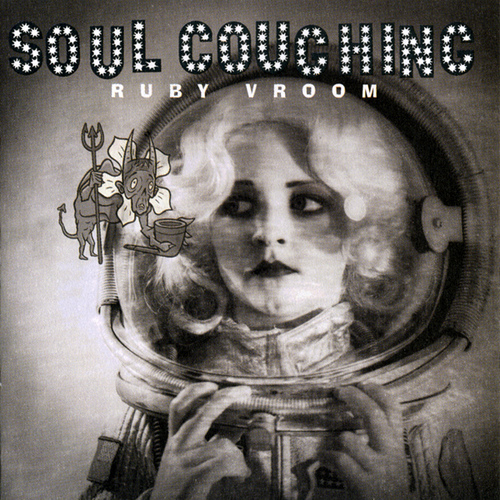 I first heard Soul Coughing when they opened for They Might Be Giants at the Barrymore Theatre in Madison about six months after their debut album Ruby Vroom came out. Going in without any expectations, it ended up the best live performance I’d seen to date (granted, my first concert was only two years before). I was so entranced that I thought I was seeing nothing less than my generation’s equivalent of the Talking Heads in terms of originality and impact as a live outfit. Naturally, I purchased a copy of Ruby Vroom not long after; nearly a decade later, I noted that it didn’t sound dated at all, that it was still unclassifiable and daringly weird: “Forget Green Day, Stone Temple Pilots, or Smashing Pumpkins–this was alternative rock,” I enthusiastically wrote.

While it’s aged far better than those more popular mid-90s artists, Ruby Vroom doesn’t exactly sound timeless today. You certainly couldn’t get away with the album’s opening lyric (“A man flew a plane into the Chrysler building”) post 9/11 and the “ironic” cover art screams 1994 more than any other album from that year I’ve covered here. Furthermore, Soul Coughing’s ultra-specific sound and aesthetic is just something you don’t hear anymore, anywhere: it feels completely relegated to that brief period of time in the early-mid ‘90s when Modern Rock was newly trendy as a commercial option, allowing for quirkier-than-usual bands to get a foot in the door. After all, Soul Coughing were on a major record label—an unthinkable prospect now.

One can neatly summarize that ultra-specific sound by breaking down its core components. First, you have the rhythm section, which consists of the usual drummer (Yuval Gabay) but also an upright bassist (Sebastian Steinberg); together, they provide an overtly jazzy foundation. Then, there’s vocalist/lyricist M. (Mike) Doughty, whom alternately sings, raps, sputters and recites spoken-word poetry in a personality-rich but musically untrained voice, somewhere between a more adroit, nasally Tom Waits and a slacker Fred Schneider. Doughty also plays rhythm guitar—the band’s most formidable connection to it even being considered alternative rock. Still, although Soul Coughing would be immeasurably different without Doughty’s contributions, its fourth member, Mark de Gli Antoni, is their true wild card. Credited with playing “keyboard sampler”, which amounted to about 10% keyboard, and 90% manipulating samples, his input is a major part of what renders so much of Soul Coughing’s output as unclassifiable.

It’s arguably the samples one notices most when first hearing Ruby Vroom because they’re so playful, creative and deftly woven into each song. “Bus to Beelzebub” is built upon an extended section of Raymond Scott’s “Powerhouse”, a tune most will recognize by sound if not by name (think of theme music for a cartoon assembly line). The sample’s repetitive, humorously anxious melody is all one hears for the song’s first few seconds; then, the rest of the band kicks in, and the melding of the two is both giddy and strangely grounded, as Doughty raps nonsense lyrics more valuable for their cadence than content (“Yellow number five, yellow number five, five, five.”) “Sugar Free Jazz”, which could almost be an unintended facsimile of trip-hop, finds Antoni’s undeniably jazzy horn interjections negating Doughty’s gutturally delivered accusations of this being a watered-down version of the real thing. Later, on “Down To This”, Doughty’s repeated chorus (“You get the ankles and I’ll get the wrists”) is juxtaposed with the album’s most familiar sample, from The Andrew Sisters’ 1940s chestnut “Don’t Sit Under The Apple Tree”: “Anybody else but me, no, no, no!” they warble. Coming right after the chorus, their cautionary pleas take on a wary, almost frightened tint, but the music’s so catchy and upbeat that it’s more fun than sinister.

In fact, “fun” is an ideal word to describe the bulk of Ruby Vroom, especially on the massive “Casiotone Nation”, an out-and-out manifesto to sampling where Antoni practically seems to exhaust every last snippet and found sound from his arsenal. However, the song’s underlying structure is rock solid: Steinberg and Gabay lay down a twisty, swinging rhythm track while Doughty ad-libs/rattles off a series of descriptive phrases that contain no deeper meaning than the randomness of their pop culture references. They all begin with the words “The Five-Percent Nation of,” which are followed by such effluvia as “corduroy”, “Milton Bradley” and “nipple clamps” before arriving at the beloved, “The five percent nation of Casiotone” (the last word emphasized and exaggerated) at the chorus. In the second verse, the repeated phrase switches to “The People’s Republic of” stuff like “Lake Edna”, “chocolaty delicious” and, exclaimed in a mocking, singsong tone, “lumps in my oat-meal!” The whole thing roars to a spazzy, furious finale, hitting upon some sort of frenzied bliss as Antoni repeatedly loops the first three words of the old Mighty Mouse theme song lyric, “Here I Come! (to save the day).”

Nothing else on the album is quite so clever, experimental and in-your-face as those aforementioned songs, but that’s a bit of a relief and a credit to the band that they’re not a one-trick pony. What Doughty ultimately brings to Soul Coughing is an unanticipated singer/songwriter vibe. It’s first heard on “True Dreams of Wichita”, a gentle, loping, nearly elegiac lament with an engaging, straightforward melody and minimalist accompaniment. Both lend heft to such hazy imagery as “Brooklyn like a sea in the asphalt stalks / push out dead air from a parking garage”, which he alternates with more lucid, emotionally effective phrases like, “I’ve seen the rains of the real world come forward on the plain / I’ve seen the Kansas of your sweet little myth.” “City of Motors” reprises a similar amount of feeling only in a more noir setting where he seems to be telling someone else’s story until switching to first-person on the plaintive chorus. On closer “Janine”, he even goes full-ballad mode: it’s a sincere, acoustic strummer easy enough for any busker to fully replicate, except for the sample of a woman singing a different song into an answering machine that simply exists throughout the track’s background—the quirky addition that fully renders “Janine” a Soul Coughing song.

These two seemingly disparate strands of edgy art outfit and story-song band join together most formidably on “Screenwriter’s Blues” at the album’s near-exact midpoint. As with “Bus To Beelzebub”, a sole, looped sample kicks things off, but it’s more for texture and momentum than any overriding recognition. After Doughty begins sprouting off spoken-word prose (“Exits to freeways / twisted like knots / on the fingers”), the rhythm section soon comes in, building up a groove in tandem with the two-note sample. Doughty then moves into a colorful yet content-rich, Bukowski-like exploration of the song’s titular profession, gleefully yet measuredly extolling both the gleaming attraction and seedy underbelly of L.A. Like an on-the-air DJ/preacher, he announces, “It is 5 A.M. / and you are listening / to / LOS ANGELES.” He goes on to tell imagined tales both commonplace and sordid (“You are going to Reseda / to make love to a model / from Ohio whose name you don’t even know”) and offer learned observations (the city has “Gone savage for teenagers who are aesthetically pleasing / in other words FLY”, that last word stretched out almost beyond the limits of sarcasm). Meanwhile, the groove just keeps on building; along with Doughty’s prose leading the charge, the song forever reaches toward that sweet spot combining total mental and physical stimulation, until, like all songs, it must eventually end—in this case, like a radio transmission fading, abruptly petering out.

Ruby Vroom itself didn’t receive any significant radio airplay (apart from independent college stations), but the band’s two subsequent records (Irresistible Bliss (1996) and El Oso (1998)) did, actually taking advantage of the opportunity bubble alt-rock briefly afforded, even scoring minor hits with “Super Bon Bon” and “Circles”. Of course, while still distinctive and notably consistent, each album sounded increasingly more conventional and predictable than the last, to the point where it wasn’t much of a surprise when Soul Coughing ran out of gas and split in 2000. Doughty eventually settled into a pleasant, if unremarkable solo career best summed up by his being on Dave Matthews’ label for a sizable chunk of it. He later revealed he didn’t get along with the rest of the band; in hindsight, that very tension between Doughty’s outsize personality and songwriter pretensions and the other band members’ “serious” jazz backgrounds (they all met when Doughty worked the front door at The Blue Note) is what made Soul Coughing interesting—a confluence of disparate influences clashing against each other, creating something entirely new. Aging cynics might claim it could’ve only happened in the mid-90s, but the optimist in me still continuously seeks out its modern day equivalent.

Up next: Borrowing from the best of all worlds and making it your own.