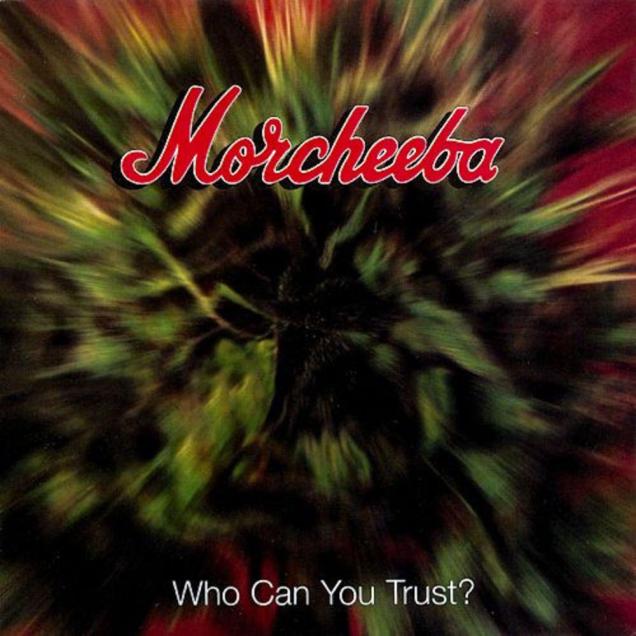 The silly band name (“cheeba” is slang for marijuana) and fuzzed-out pot plant album cover both insinuate that this British trio’s debut LP could just as easily be called Music for Stoners; as one of the most languorous, chilled-out trip-hop records of its era, that’s not inaccurate. However, as someone who rarely smokes (and has never listened to this record while baked), I can confirm that the drug references are really irrelevant to any aural contact high the music provides. Who Can You Trust? endures two decades on because it immediately forges a palpable, captivating, focused mood (with a groove to match) and fully sustains it over an entire album four minutes shy of an hour long.

“Moog Island” slowly fades in on a hazy surge of soupy electronic effluvia, much like “Summer Cauldron” on XTC’s Skylarking did ten years earlier. Courtesy of Morcheeba’s DJ, Paul Godfrey, he then lays on a gentle, bossa nova drum machine track over which you hear synths and some guitar from his multi-instrumentalist brother, Ross. Still, it’s all just build-up for the band’s not-so-secret weapon, black female vocalist Skye Edwards. Her serene tone suggests a slinkier, silkier Sade, while the bell-like clarity she lends to the song’s amiable melody could be Ella Fitzgerald on ‘ludes. Her singular presence stands in direct contrast to fellow British trip-hoppers Portishead, whom are defined by singer Beth Gibbons’ decidedly chillier, more insular persona.

Fading out as gradually as it did in, “Moog Island” firmly (it its own woozy way) sets the scene, establishing Morcheeba’s overall sound, spirit and vibe. Still, if you’re not already listening to it on headphones, you’ll want to don a pair for “Trigger Hippie”, which opens with a loud sitar sample, hypnotically undulating like a foghorn. The groove’s slightly more juiced up here, but only slightly. Ross’ slide guitar is as essential an element as Paul’s turntable scratching, but it’s Edwards who really sells the song: the lyrics are dippy enough for Oasis (“Tune in, drop out and love”) until they’re not, when she slyly sings, “Pull the trigger, I’m a hippie.” On one hand, it’s a dumb, catchy tune right down to the telegraphic beeping chorus hook, but it duly stimulates as all its musical layers provide additional hooks-for-thought; also, the idea of being a “Trigger Hippie” is as evocatively mysterious and seductive as the strange pull of Edwards’ voice.

From there, Who Can You Trust? seemingly, effortlessly maintains its groove, even as it sidesteps Edwards for the instrumental “Post Houmous” (resembling incidental film music with slightly too much personality to remain incidental for long) or sharpens it into funk/rock on “Tape Loop” (which ends on an extended wah-wah guitar solo/record-scratching vamp) or decreases the tempo just a tad for “Never An Easy Way” (whose final thirty seconds are a beat-less psychedelic freak-out—perhaps “wooze-out” is more apt). “Howling”, however, takes everything to the next level. It retains the hip-hop groove, but adds in more guitar and an underlying cello. The melody, each line of it consisting of four simple notes is enhanced with majestic chord changes. After the second chorus, strings materialize, dramatically opening up the song like they did in Portishead’s “Roads”. Although no one would ever mistake Edwards for Aretha Franklin, she sounds more impassioned, urgent, even. Never a single, “Howling” is a lost trip-hop classic, as representative of what beauty this much-maligned genre could achieve as Massive Attack’s “Unfinished Sympathy”.

Although the album’s second half is superficially (and at least, tonally) more of the same, it occasionally tinkers with the first half’s formula. Initially, “Small Town” feels indistinguishable from a track like “Never An Easy Way” until you notice the pointed, almost angry (well, as angry as Morcheeba gets) lyrics: “The High Street’s sleeping / as Friday’s creeping / the shops are open / but their minds are closed.” The steady reggae beat and growling chorus sax also both give the song a bit of a prickly edge mostly absent from what came before.

The beat drops out altogether for the next two songs. “Enjoy the Wait”, a minute-long instrumental, sums up the Godfrey brothers’ individual interests: Ross’ bluesy guitar (complete with turntable fuzz to resemble a Robert Johnson recording) sits on the left channel, while Paul’s oscillating electronic noise whirrs on the right. Neither one appears on the following “Col”, a stark, strings-and-voice number occasionally punctuated by a French horn and a muted trumpet. It’s a completely unexpected arrangement for Morcheeba, but it proves a perfect combination, melodically similar to what surrounds it but powerful for the ambition it relays. It makes you wonder whether they could pull off a whole album of such exquisite stuff, or at least one spectacular James Bond theme.

After “Col” ends on a lone trumpet, the title track begins. Built upon a four-note Fender Rhodes riff, it’s a vamp that extends for nearly nine minutes, awash in dub reggae, guitar noodling, and a cavernous, plodding beat (that halfway through speeds up for a minute, but remains muffled in the mix, as if covered in fog). Edwards doesn’t make her entrance until the midpoint, and even then she mostly emits wordless sighs except for a brief interval after the seven-minute mark where she chants the song title a few times. The track is probably what most people would expect trip-hop to sound like without ever having heard it; more song-minded listeners drawn in by the clearly defined hooks of “Trigger Hippie” and “Howling” will likely feel unmoved by it. But it successfully, persistently pushes forward, achieving Zen-like bliss instead of aimlessly drifting off into the ether.

The next song, “Almost Done” feels like a continuation of the title track, but adds actual lyrics and has a three-note riff. Some may find it a gimlet-eyed, patience-testing narcotic, but if you give yourself over to it, you’ll pinpoint deep emotion within. Deceptively gently, Edwards sings, “Swallow all my pride / choke on all your lies,” and it almost makes up for the now-dated, spoken male voice sample (“That is something”) that the Godfreys get way too much mileage out of. After a record-scratching flurry confirms “Almost Done” is done, the album concludes on an “End Theme”, a cheeky instrumental reprise of “Moog Island” that could be played over hypothetical closing credits. It lightens the mood considerably, upping the original’s kitsch factor with an echoing beeping noise straight out of The Jetsons, a lead guitar that could’ve come from an Urge Overkill album, and a flute supplanting the vocal melody (while Edwards “doo-doo-doo’s” in unison with it).

In a genre more fondly remembered for its singles and one-offs, Who Can You Trust? deserves a mention in the same breath as Dummy and Blue Lines in the (admittedly tiny) canon of great trip-hop albums. Since its release, Morcheeba has recorded seven more—some of them not strictly trip-hop (the pop-leaning Fragments of Freedom), others without Edwards, who temporarily left the band in the mid-00s (The Antidote and Dive Deep—both featuring replacement vocalists, if you can believe it!) before returning for 2010’s solid Blood Like Lemonade. My favorite follow-up remains the second LP, 1998’s Big Calm, which rings true to its predecessor’s vibe but successfully expands it to include such stuff as the homey, fiddle-laced “Part of the Process” and “The Music That We Hear”, which transmogrifies “Moog Island” and “End Theme” into the pop gem it was always meant to be. For a purely consistent listen, though, Who Can You Trust? remains aces.

Next: Learning to live on your own.