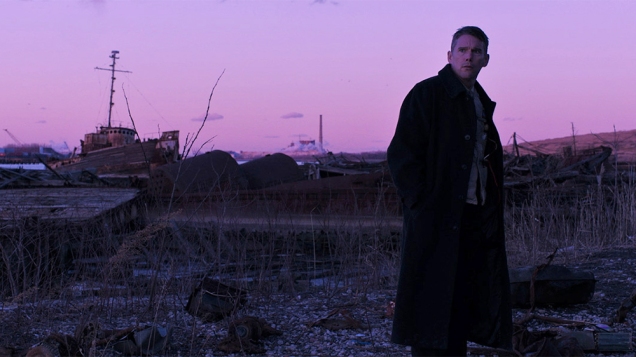 Movies seen in May; starred titles are re-watches.

RBG
Extraordinary subject, average execution but at least in this case average doesn’t mean boring or even fawning, exactly. The only real misstep is that opening voice-over litany of dissent against Justice Bader-Ginsburg, rattled off as if to get it out of the way. Once you get past the expected stuff about her being a meme and pop culture icon, there’s considerable substance about what she actually accomplished and the lengthy, painstaking process she went through to get there. And let’s face it, political sympathies aside, a film called SCALIA! would never have been as much fun as this. Grade: B

God’s Own Country
An impressive feature debut for writer/director Francis Lee, who has a real feel for depicting physical intimacy, both sexually and in terms of relation to one’s own environment. The shame-free gay love story he constructs almost feels revolutionary in a film that’s otherwise about the ins and outs of carrying on a traditional way of life that’s increasingly challenging in the modern world. A-

Women On The Verge Of A Nervous Breakdown*
One of Almodovar’s best, and easily his most realized screwball comedy. There’s nothing gazpacho can’t fix (if you mix it right.) A

The Meyerwitz Stories (New and Selected)
A great ensemble cast (yes, even Adam Sandler) with the lesser-known Elizabeth Marvel the MVP, however sparingly she’s used. As Noah Baumbach films go, not quite up there with FRANCES HA (which was just as much Greta Gerwig’s, particularly in light of LADY BIRD), but I’d much rather sit through it again than anything else he’s put out since. B+

Let The Sunshine In
Leave it to Claire Denis to open her latest by saddling Juliette Binoche with one heck of a blowhard beau and close it on an extended conversation between Binoche and Gerard Depardieu, decidedly *not* her beau (his actual role’s too good to disclose here.) In between, Denis’ seemingly ageless lead, playing a divorced, middle-aged artist continually pivots from one man to another in search of The One, only for it to slowly dawn on her maybe, (to paraphrase Rachel Bloom) the situation’s a lot more nuanced than that? Simultaneously confusing and enthralling like any good Denis, but also not quite like any of her other films (also typical for Denis.) B+

Strike A Pose
A profile of the male backup dancers on Madonna’s 1990 Blonde Ambition tour, notable not only for the where-are-they-now contrasts but also for the exposure afforded them via the infamous tour doc TRUTH OR DARE, which proved a double-edged sword. There’s an excess of great footage here, but it lacks focus scene-to-scene (all the disparate modern-day stuff doesn’t help) which is crucial in order for the overarching chronology to work. Still, the participants’ reunion near the end is lovelier than most of that trope. B-

The Misfits
The objectification of Monroe here hasn’t aged well (especially when you consider her husband wrote it!); otherwise, fascinating for what it represents about a dimming Hollywood, as it was the last film for two of its stars, and two of the other three principals would also be dead within a decade. If you have any qualms about Monroe’s acting, just watch her transformation from coquettish, adoring girlfriend to a raw maelstrom of devastation in the horse-wrangling sequence. B

First Reformed
I believe any work of art has the potential to be both ridiculous and sublime, however rarely one achieves such a tricky balance. To its credit, FIRST REFORMED is often firmly the latter—the austere opening credits sequence with its extended zoom-in; the simple, profound economy of the editing; tonally, how the dread keeps building, almost becoming constrictive but not altogether suffocating; and of course, Ethan Hawke, perennially underrated as he ages but arguably never better in a role he nearly disappears into.

The ridiculous stuff comes at the hysterical finale, but it’s to be taken seriously because it’s not silly and not played for camp or irony (just as the last fifteen minutes of TAXI DRIVER were outrageous and totally plausible.) The score gets to be a little much in the last third, but the straight-faced hymn accompanying those final minutes is perfect. Themes of climate control and corporate influence place the film firmly in the here and now, but otherwise, it feels as timeless as the work of director Paul Schrader’s old hero Carl Dreyer. A-

Flirting With Disaster*
Maybe not the best screwball comedy of its era as I once thought, but pretty damn close.
“We love you very much. If you were Jeffrey Dahmer, we would still love you.” A-

Back To The Future*
What I wrote upon my previous viewing on October 21, 2015: Influence of childhood nostalgia aside, it’s still the best blockbuster of its era, and now looks like one of the more audacious ones, too—would the oedipal stuff between Marty and his mother even be thinkable in a studio film today? A

Liquid Sky
Loved the striking visuals, time-capsule fashions and Anne Carlisle (more so as Jimmy than Margaret); didn’t much care for the rampant misogyny and numbingly awful score. Not nearly as essential a cult film of its time as REPO MAN or EATING RAOUL, but I’d happily watch Paula E. Sheppard spitting out “Me and My Rhythm Box” on a ninety-minute loop. B