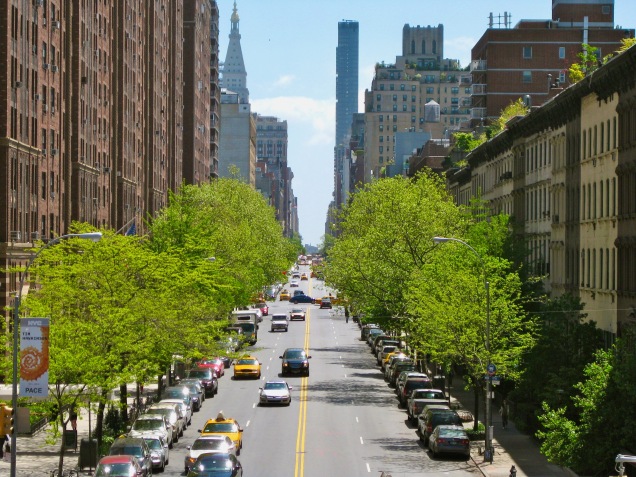 I’ve been to New York City at least a dozen times in the past two decades. Since another visit right now is out of the question, here are a few favorite pics from those trips. Above is a view of West 23rd Street taken from the High Line in 2013.

Given how massive (and ubiquitous) NYC is, I’m eschewing landmarks for selected obscurities teeming within this metropolis. This tunnel, one of many in Central Park, may be my most recognizable image from here on out.

Manhattan architecture is a caustic mixture of old and new (and Duane Reade stores.)

A typical block in the East Fifties that could be just about anywhere in Manhattan.

This block’s much more distinct: MacDougal Alley in Greenwich Village, not too far from Washington Square Park.

Even less fancy corners, such as Avenue A and East Third Street in the East Village are marked with such oddities as this zigzag-bricked building.

Despite all-encompassing gentrification, remnants of old New York hang on, like this ancient supermarket on the Upper West Side…

…or this established-in-1950-and-miraculously-still-looks-it steak joint on the Upper East Side. 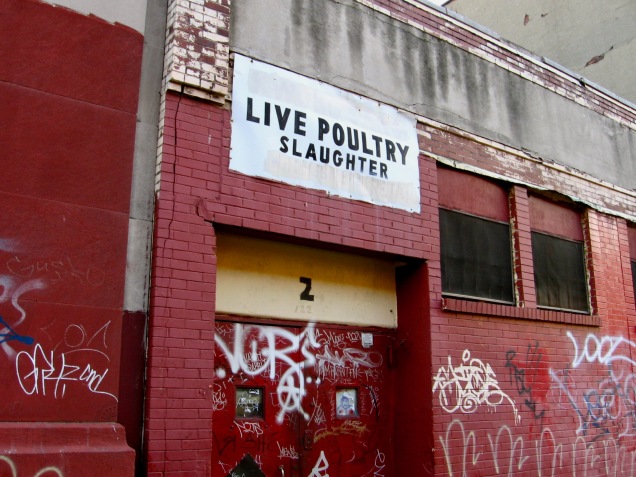 Took this in Greenpoint, Brooklyn in 2006. The business has since closed but the sign remains, sort of.

21st Century signage in NYC doesn’t have to be dull or uniform, as seen at the Soho outpost of this five-store chain.

However, clever can only take you so far: my gut reaction at first seeing this in 2015 was, “OH NO THEY DIDN’T.”

This cleverness I can appreciate, given my folks were Des Moines-ers for twenty years. 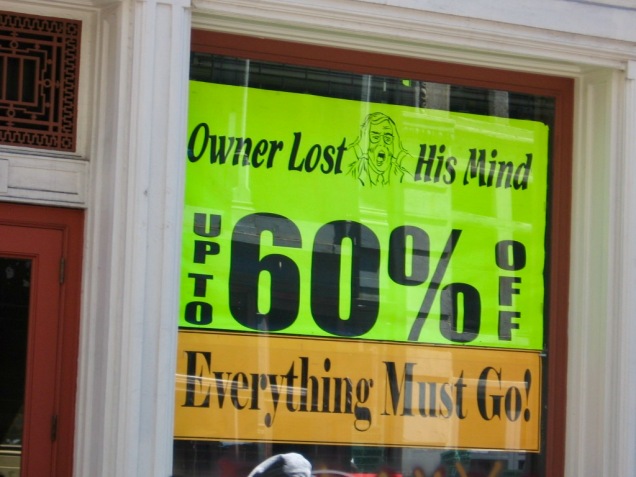 This sign is still my favorite ever spotted in NYC: April 2006, on Broadway in Soho.

Over to Williamsburg, Brooklyn, six months later. There’s something funny about a “Teabag Variety Hour” that I’m guessing the proprietors of this establishment never intended.

Over to the Bowery and Spanjer Signs on Chrystie Street (enhanced by some whimsical graffiti) in February 2012.

In terms of attitude, this pic from the West Village circa 2007 might be the New York-iest of them all.

Well, this jalopy found a parking spot; god knows how long it’s been left there.

My last couple of trips to NYC have included dinner at Lilli and Loo, a cozy, bi-level pan-Asian restaurant in Lenox Hill.

Around the corner from Lilli and Loo, May 2014. I just love the exaggerated, lackadaisical posture of the guy in the middle: Candid New York, if you will. 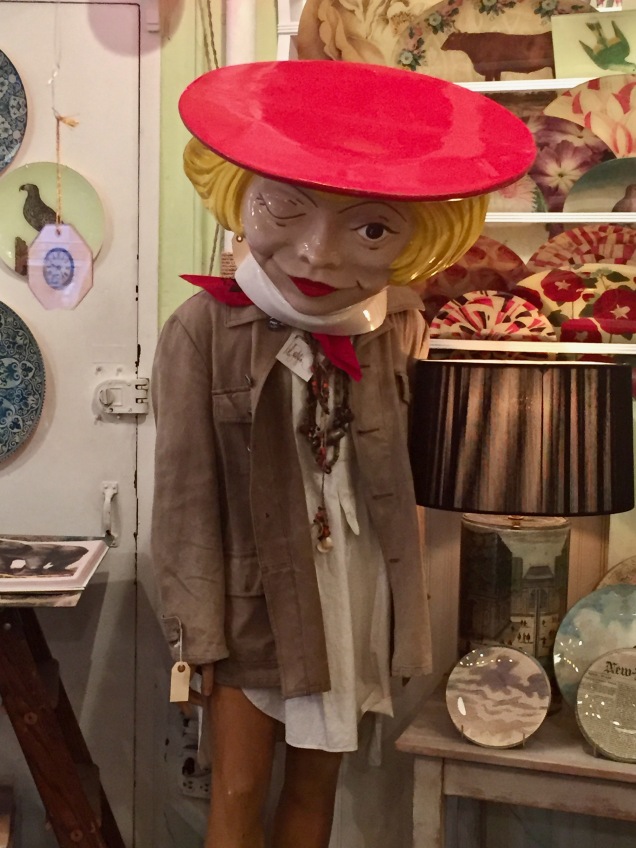 In my opinion, one of the city’s most beguiling oddities, spotted at the John Derian Dry Goods store on East Second Street in 2017. Half Carol Channing, half Buster Brown? 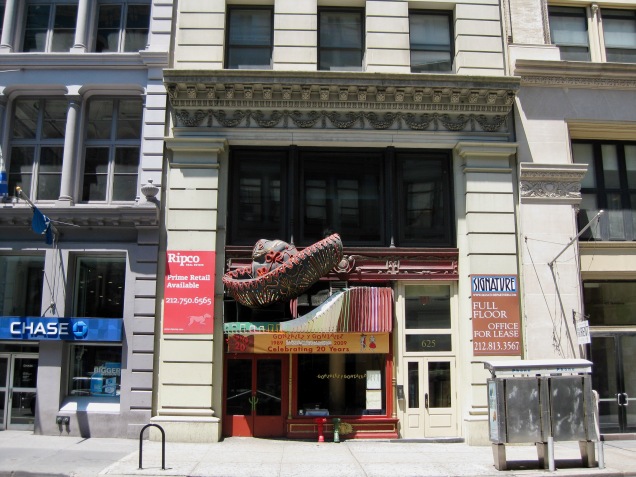 Thankful I thought to take a pic of Gonzalez Y Gonzalez restaurant and its gaudy, giant sombrero back in 2009 because this location is long since gone (though relocated sans hat on the exterior.) 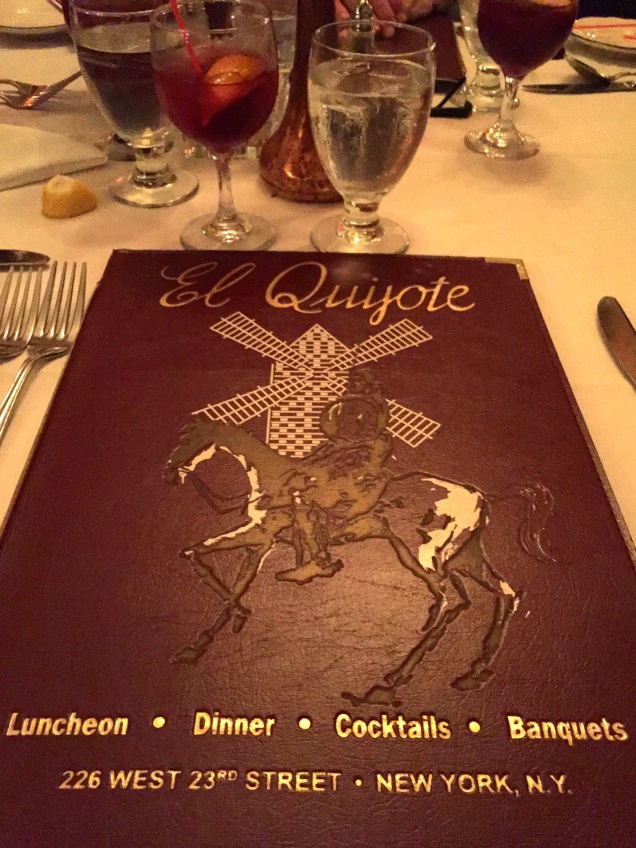 El Quijote, a venerable Spanish restaurant next to the Chelsea Hotel, is also now gone (and sadly has not relocated.) Took this pic of one of their typically ancient menus on my last visit there in 2015.

I was last in New York about three years ago for the funeral of my closest friend who lived there. After the service, my husband and I took a restorative walk around Stuyvesant Square Park where I spotted this tableau: like a mighty stone fortress emerging from the flora, providing hope that through all the inevitable changes in a city like New York, some things remain and appear indestructible.

I leave you this pic from Greenpoint, October 2006: Endless Brooklyn. I hope someday to return to this maddening, magnificent metropolis.