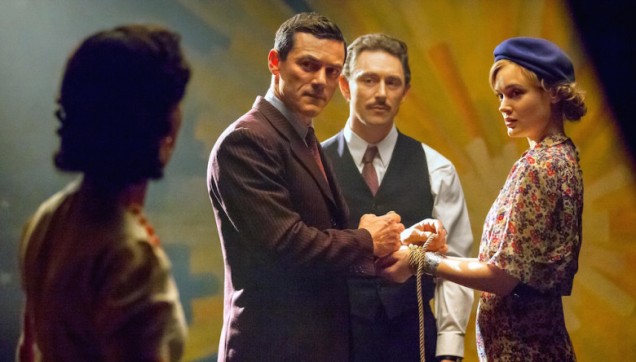 Films seen in July, including two of the best new(ish) ones right at month’s end. As usual, starred titles are re-watches.

The Little Hours
Can’t go wrong with Aubrey Plaza as a profane nun, or even Dave Franco as a fake deaf-mute sex slave. I wish it was all a little more than it was; perhaps the cast should reunite for another Pasolini remake? (Not SALO.) B-

Damsel
The Zellner Brothers’ previous film, KUMIKO, THE TREASURE HUNTER, may end up on my top ten list for the decade, so this is a slight comedown. The less one knows going into it, the better, so I’ll just complement Mia Wasikowska for continuing to make smart choices and Robert Pattinson for being open to exceedingly weird ones. Not so much an anti-Western as an anti-Rom-Com. Stunning to look at, leaves one with much to ponder, but it also induces whiplash and it could’ve been a bit shorter. B

Leave No Trace
Although far less prolific, I’d like to think of Debra Granik as the American Mike Leigh for her depiction (consideration, even) of the rural working-class without condescending to them. Not as seminal or all-out engrossing as WINTER’S BONE, but teenager Thomasin McKenzie’s every bit the find Jennifer Lawrence was, even if her contained performance is entirely different. Ben Foster exhibits the right amount of restraint in what could’ve been a showy role and Dale Dickey as always is a welcoming presence in a smaller, not to mention kinder part than her WINTER’S BONE matriarch. I’m somewhat torn on the gutsy ending—at the very least, Granik doesn’t opt for an easy way out of the conundrum she’s set in motion. A-

Apocalypse Now*
Not a fan of war films, but I could return to this one again and again more than any other of its genre (except maybe ARMY OF SHADOWS.) A

Zama
Apart from her debut feature LA CIENAGA, all of Lucrecia Martel’s films have left me cold and damned if I can pinpoint why. As a big fan of stuff like Tarkovsky’s STALKER, it’s not like I abhor slow cinema; I just feel a disconnect, something in her narrative approach that prevents me from giving myself over to whatever she’s putting across. This one, centered on the titular Spanish magistrate in an 18th century South American colony is beautifully shot and laced with mordant humor but it seems to just circle and circle without going anywhere—that is, at first, for something genuinely shocking happens in the last fifteen minutes. In retrospect, the film had been building to that moment, if obliquely, and I’d bet a second viewing would make this clearer. I can’t say ZAMA suddenly clicked with me at that point, but I admit it jolted me into attentiveness and raised my grade a notch. B-

Three Identical Strangers
A stranger-than-fiction doc even *more* fun than but nearly as disturbing as CAPTURING THE FRIEDMANS? No wonder it’s the feel-good-then-feel-bad indie hit of the summer. The first half hour or so is immensely entertaining; the increasingly wacko plot twists that follow sustain that excitement, heightening the impact as things turn tragic. However, a lack of resolution keeps the film from transcending its novel hook—it attempts a definitive argument at the age-old question of nature vs. nurture, but its conclusions aren’t entirely convincing or nuanced enough. B

Don’t Worry, He Won’t Get Far On Foot
Wildly uneven like a lot of Van Sant: at worst, the stuff about John Callahan’s pre-accident drinking and post-accident love life threatens to slide into a mawkishness of near GOOD WILL HUNTING proportions. On the other hand, nearly all of the AA scenes are golden—I haven’t seen another contemporary film go so deeply or thoughtfully into the minutiae and philosophy of 12-step recovery. So many terrific performances here: Phoenix, of course, but also Jonah Hill wonderfully exhibiting restraint while portraying a flamboyant character and decent smaller turns from Kim Gordon, Jack Black (esp. in his scene late in the film) and musician/model Beth Ditto, whom as an actress turns out to be a delight. B

Winter Kills
First heard about this in Charles Taylor’s indispensable book on ‘70s genre cinema, OPENING WEDNESDAY AT A THEATER OR DRIVE-IN NEAR YOU. Not convinced it’s an underseen masterpiece like BRING ME THE HEAD OF ALFREDO GARCIA (the book’s centerpiece), but definitely worth a look, if not just for a physically-in-his-prime Jeff Bridges and wacko cameos from the likes of Dorothy Malone, Toshiro Mifune and (briefly) Liz Taylor. An almost chillingly prescient satire, you’d only need to update the dates and change the answering machine motif to a smartphone to remake it verbatim for the present day. B+

Do The Right Thing*
First viewing in 20+ years. I’ll just note that when Spike Lee is bad, he’s atrocious, but when he’s good, like in PASSING STRANGE, MALCOLM X, 25TH HOUR and especially this film, he can be fucking tremendous. Resonates more today than any other film from 1989, I’d bet. A

Yellow Submarine*
The trippiest movie you could ever take the whole family to. Also probably the Beatles’ second best (certainly better than HELP!)—telling that it flags whenever they’re absent from the screen. The music in this latest digital restoration sounds absolutely sublime. B+

Blindspotting
As regional/provincial cinema goes, this is valuable enough—it depicts Oakland lovingly without sentimentalizing it. Diggs and Casal are also good together (and apart) and should each be in more films, please. However, the direction’s ham-fisted, the hipster house party is too satirically glib to mesh with the film’s stabs at “realism” and the climax hinges upon a coincidence I just didn’t buy. Grading generously, though, because it has something vital to say, even if it somewhat fumbles the execution. B-

Professor Marston and the Wonder Women
Guessing this wasn’t a box-office failure because of the kinky threesome/bondage stuff as inspiration for the most popular female superhero of all time; rather, it didn’t connect because it’s possibly the first comic book-related film with brains, taking a deep dive into the psychological implications behind the character, which, if you’re open to it, is arguably more stimulating than the sex stuff. Also, I’d forgotten how good Rebecca Hall can be: she’s so abrasive, tart yet likable—sign her up to play a Mike Leigh heroine. A-

Sorry To Bother You
Unapologetically silly and more than a bit slapdash, but also weirdly convincing in what it wants to do and howlingly funny while doing it. I haven’t seen anything that felt so alive since THE DEATH OF STALIN; time will tell whether Riley’s bold, often-ridiculous, wildly entertaining debut ends up feeling strictly of-the-moment or like a premonition. A-