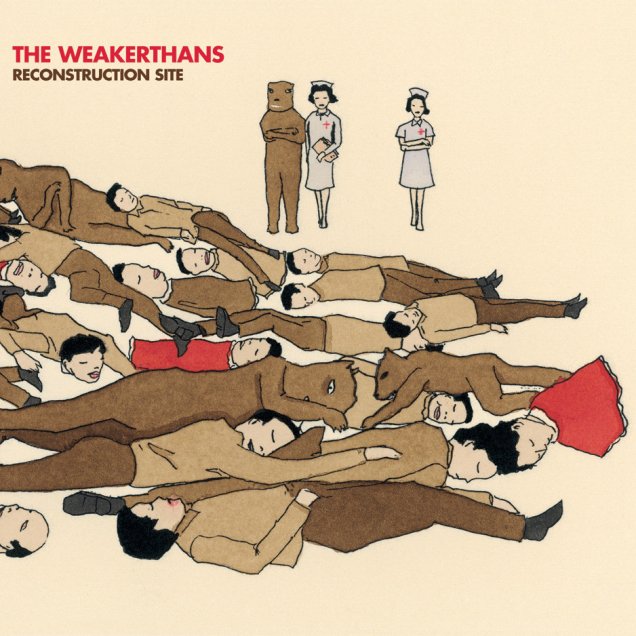 Track listing: (Manifest) / The Reasons / Reconstruction Site / Psalm For The Elks Lodge Last Call / Plea From A Cat Named Virtute / Our Retired Explorer (Dines With Michel Foucault In Paris, 1961) / Time’s Arrow / (Hospital Vespers) / Uncorrected Proofs / A New Name For Everything / One Great City! / Benediction / The Prescience of Dawn / (Past Due)

The Weakerthans are a band as defined by and emblematic of where they come from as Calexico. Granted, Winnipeg, Manitoba is by nature a far less exotic locale than Southern Arizona; the difference immediately surfaces in the former band’s sound, which is your basic guitar-bass-drums (and very occasional keyboards) rock quartet setup—a far cry from Feast of Wire’s melange of mariachi horns, pedal steel, accordion and likeminded regional elements. Still, in terms of subject matter and sensibility, The Weakerthans are unquestionably Winnipeg-ian to the core, which may explain why they only ever generated a cult following south of the border.

Formed in 1997, the band’s breakthrough beyond Canada occurred six years later with their third album Reconstruction Site. I’d like to think this happened simply because it was so damn good, although signing to notable American indie punk record label Epitaph surely had something to do with expanding the band’s reach. While no one would ever in their right mind call The Weakerthans “punk” (although a majority of this album’s songs clock in at under three minutes), at least three of their four members had roots in Winnipeg’s punk scene, with vocalist/lyricist John K. Samson playing bass in the long-running punk band Propagandhi in the early-mid ’90s. A few of this album’s more uptempo numbers, like “Plea From A Cat Named Virtute” and “The Reasons” could even almost be punk if they weren’t so polished and, well, pop.

Still, Samson conceived the band as an outlet for more introspective songwriting than punk as a genre could ever allow. Keeping this in mind, Reconstruction Site discloses its ambition from its very first track, “(Manifest)”, a brief preamble that opens on the couplet, “I want to call requests through heating vents / and hear them answered with a whisper, ‘No.’” It turns out those words are the first two lines of a sonnet, a poem of strict rhyme scheme and specific structure popularized by Dante and Shakespeare but not widely found in Rock music. Later, at the album’s exact midpoint and end, two other tracks, “(Hospital Vespers)” and “(Past Due)” repeat the same melody and sonnet structure, forming a trilogy with “(Manifest)”. The only variable between the segments (apart from different lyrics) is the music, which changes from a martial thrum-and-strum complete with a concluding trumpet fanfare (“(Manifest)”) to a rhythm-less crawl through backwards tape loops and other fancy production effects (“(Hospital Vespers)”) to, finally, clanging percussion enveloped in synths, closing out with a bit of electronic effluvia (“(Past-Due)”).

Just as ambitious is Samson’s literary/intellectual bent. On one song, he imagines an inebriated conversation between an eminent French philosopher and a fellow traveler of Ernest Shackleton’s Antarctica expedition (with the wordy title “Our Retired Explorer (Dines With Michel Foucault in Paris, 1961)”); on another, he sings from the point of view of a disgruntled pet (“Plea From A Cat Named Virtute”.) And yet, the former never feels obscure or impenetrable thanks to its brisk pace and sing-along worthy cries of “Oh, Antarctica!” Likewise, the latter never turns overly twee, greatly enhanced by a monster of a guitar riff, but also such first-person feline observations as “So, we should open up the house / invite the tabby two doors down. / You could ask your sister, if / she doesn’t bring her Basset Hound.”

“Virtute” also reveals perhaps the most vital component of Samson’s persona—a mile-wide empathy streak befitting of someone from an underdog metropolis like Winnipeg. The song’s titular narrator may pity its depressed owner for holding on to such ephemera as “tape-hiss” and “Card Catalogues” and even lash out, threatening, “I swear I’m going to bite you hard and taste your tinny blood.” The music comes to as dramatic pause at this moment, before Samson concludes the thought, “…if you don’t stop the self-defeating lies you’ve been repeating since the day you brought me home.” Samson concludes on the phrase, “I know you’re strong,” and his vulnerable, near-wobbly reading of it reveals everything you need to know about his capacity for and belief in human nature.

Empathy bleeds out of the edges of a majority of The Weakerthans’ tunes, and Reconstruction Site features some of their most intricately observed and deeply felt expressions of it. “Psalm For The Elks Lodge Last Call” depicts its milieu as an object not to be satirized or sainted, but as a collection of ultra-specific details—the crackling “Golden Oldies station”, the “secret handshake” that needs safeguarding, how small talk about “the ballgame and the weather” conveys its own respect for the social contract. And the repeated phrase, “Before we say goodnight,” resoundingly renders it all a pop song, not only for the Elks members to sing with each other, but as something any listener can partake in and relate to.

“Psalm” is but one of many examples here. The title track is itself kind of a “Card Catalogue” of precise recollections such as “I’m afloat. A float in a summer parade, / up the street in the town you were born in,” and “I broke like a bad joke / somebody’s uncle told at a wedding reception in 1972.” “Time’s Arrow” similarly depicts “a mirror you will find at your parents’ house in 1989” as a place to keep promises to yourself. Rather than lapse into solipsism, Samson remains congenial and approachable, his words enhanced by a poignant melody and a gorgeous guitar riff that resembles something close to a less-corporate Gin Blossoms. “A New Name For Everything” admirably resists the urge to make light of both gentrification and redundancy—while not humorless (“So put on the clothes you never grew into / and smile like you mean it for once”), it thoughtfully considers such common problems as “When you can’t save cash or conviction,” or when “the threads of your fear are unfurled with the tiniest pull.”

The album’s anthemic single “The Reasons” finds Samson at his most direct and immediate. It kicks off with him confessing, “I don’t know how to sing. / I can barely play this thing.” The unnamed person he’s addressing doesn’t mind, but he or she tells him to “fuck off” whenever he needs someone to say it to him. He sings of “how the time is never now / and we know who we should love / but we’re never certain how,” conveying sentiments most of us have had at one time or another, while the song’s opening melodic guitar riff returns in the bridge to a chorus as simple and heartfelt and perfect as anything ever written: “I know, you might roll your eyes at this / but I’m so glad that you exist.”

However, another song on the album’s second half even more fully encapsulates why anyone should be glad The Weakerthans exist. “One Great City!” is a standout alone for its spare, acoustic guitar-and-voice arrangement, but that’s not what makes it special. Over three verses, Samson depicts a most particular and vivid portrait of his hometown, a place where “Another day is nearly done / A darker grey is breaking through a lighter one.” It’s a city full of Dollar Stores, “that hallowed, hurried sound of feet on polished floor,” and such dubious homegrown celebrities such as The Guess Who (bluntly, they “suck”.) Each verse ends with him singing, “I Hate Winnipeg.” The first two times, it comes off almost sardonically, as if Samson’s taunting the town and its euphemistically optimistic tourism slogan (which provides the song’s title.) And yet, there’s a crucial tonal shift in the truncated third verse: “Our Golden Business Boy will watch the North End die, / and sing, ‘I love this town,’ / and let his arcing wrecking ball proclaim, ‘I… Hate… Winnipeg.’” On those last three words, Samson sounds utterly remorseful and almost defeated. What previously edged towards mocking celebration is now an elegy, quietly devastating in its plainspokenness.

The Weakerthans would release one more album, 2007’s nearly-as-good Reunion Tour, before officially splitting in 2015. “One Great City!” would find new life in 2008 as a theme song for a Canadian TV series, Less Than Kind. Samson eventually forged a solo career with Provincial (2012) and Winter Wheat (2016); the latter features extensive contributions from two of the three other Weakerthans and works as an older-and-wiser, predominantly acoustic brother to Reconstruction Site, with Samson’s enduring empathy fully intact (one lyric from “PostDoc Blues” goes, “I believe in you and your PowerPoints.”) As for myself, I probably won’t ever visit Winnipeg, but between this band’s greatest songs and the films of fellow denizen Guy Maddin, I feel like I already know it well.