9. Ted Leo, “The Hanged Man”
Leo kept us sane during the George W. Bush years, so it’s fitting that he chooses to make a full-throttle return now. Not counting The Both, this is his first album since 2010, and also the first credited solely to him without The Pharmacists, which is key. While always personable, his lyrics have rarely been so personal. He opens up about being abused as a child and his wife’s miscarriage, but he doesn’t let exorcising his demons get in the way of the defiant exuberance one always expects from him. Plus, there are enough new wrinkles here, like the overlapping vocals at the close of “Used To Believe” or the wisdom and warmth of “William Weld In the 21st Century” to suggest that this album is not a retread, but a way forward.

8. Emm Gryner, “Only Of Earth”
Gryner’s career longevity comes from both remaining fiercely independent and maintaining an inclusiveness that only someone with her caliber of talent can pull off. Her latest contains everything from piano balladry (“Comets Call”, alternate-world AOR standard “A Mission”) and Wendy and Lisa style psych-pop (the utterly charming “Imagination”) to Hammond organ-drenched, tempo-shifting prog (“The Passing of Ayro”) and late ’80s vintage synth-pop (“Blood Balloons”). She attempts to tie it all together as a sort of autobiographical concept album, with echoing melodies and lyrical callbacks strategically placed throughout. Although I still prefer 2011’s absolutely perfect Northern Gospel, this ambitious collection is her best since and another solid effort in an oeuvre full of ‘em. (No YouTube clips yet; to find out more, go to her PledgeMusic page.) 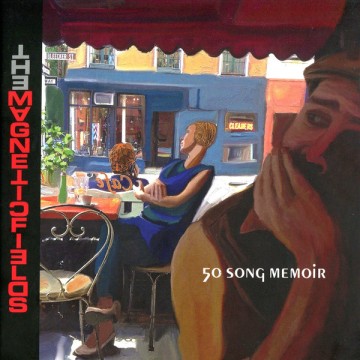 7. The Magnetic Fields, “50 Song Memoir”
Not in the same league as 69 Love Songs—with Stephin Merritt (understandably) singing on every last track, the earlier set’s four supplementary vocalists are much missed. Still, as autobiographical albums go, this one’s essential. Never say that Merritt doesn’t commit to a concept, and returning to one not solely defined by an aural aesthetic gives him an ideal platform for his encyclopedic pop knowledge. The set’s saving grace, however, is the ten-songs-per-disc format, which renders it all digestible, and the highlights, ranging from odes to “Judy Garland” and disco on the radio (“Hustle ‘76”) to clever ditties about roommates (“Me and Fred and Dave and Ted”) and favorite watering holes (“Be True To Your Bar’) are delicious indeed.

“Me and Fred and Dave and Ted”: