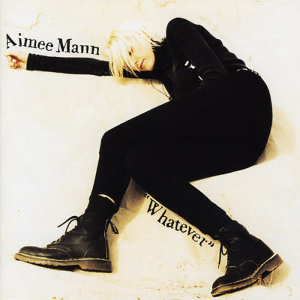 Track listing: I Should’ve Known / Fifty Years After The Fair / 4th of July / Could’ve Been Anyone / Put Me On Top / Stupid Thing / Say Anything / Jacob Marley’s Chain / Mr. Harris / I Could Hurt You Now / I Know There’s A Word / I’ve Had It / Way Back When

In 1993, Aimee Mann was best known as the lead singer of ‘Til Tuesday, a Boston quartet who scored one big hit eight years previously (“Voices Carry”), recorded three albums with each selling less than the previous one and split up before the 80s were over. The hit’s iconic music video forever etched a particular image of Mann in many people’s minds—the new wave girl with the single braid who, after three minutes of tolerating her bad, verbally abusive beau, finally, defiantly stands up and sings out loud in a theatre, much to his (and the surrounding audience’s) chagrin. Thus, by the time she re-emerged with her first solo album Whatever, it took most people by surprise, for who had expected that girl with the braid to make something so relatively inventive and smart?

Perhaps the album’s quality would’ve come as less of a shock if ‘Til Tuesday had been more than a one-hit wonder. While much of their early output is of a piece with the slick, period-reminiscent, synth-heavy sound of “Voices Carry”, one can sense Mann struggling to break out of that stylistic box as early as “Coming Up Close”, a gorgeous, sweeping pastoral ballad from the band’s second album Welcome Home (1986). The maturation between even that album and Everything’s Different Now (1988) is almost staggering: although still fairly glossy, the arrangements are far more nuanced (possibly the reason why it flopped, even with such melodic gems as “(Believed You Were) Lucky”), and the songs get their charge from Mann’s prickly, probing lyrics, many of them about her failed romance with fellow singer/songwriter Jules Shear.

Appearing five years later, Whatever and its opener and first single, “I Should’ve Known”, swiftly establishes Mann as the new alt-rock queen of the kiss-off. Following an extended, sonically adventurous intro (as if the track’s mechanisms are gradually coming to life), the guitars and drums soon kick in, along with Mann’s incensed but measured vocal. In ‘Til Tuesday, she never rocked so hard or appeared so explicitly angry, but her wry approach here keeps it all from becoming too heavy. She expertly utilizes both wordplay (“The minute that we hit the wall / I’ve should’ve known / the writing was upon the stall”) and onomatopoeia (the sung ellipses (“dot, dot, dot”) that immediately follow the song title, providing one of the biggest hooks). She even tempers her bitterness with sweet, Beatles-esque “ahhhs”. You could not ask for a better introduction or make a stronger case for Mann’s arrival as a solo artist.

The rest of Whatever dutifully showcases all her melodic instincts and songwriting prowess cultivated since ‘Til Tuesday disbanded. “Could’ve Been Anyone” and the nimble, poised “I Could Hurt You Now” are more sprightly kiss-off tunes in the mold of “I Should’ve Known”, while other songs take a few steps back, tartly addressing problematic relationships while being in the thick of them. In “Say Anything”, she acknowledges “the comfort of one more lame excuse” via a bridge with a wonderfully circular, Todd Rundgren-like bassline before telling her lover in the chorus, “Say anything, ‘cause I’ve heard everything.” Lest you think Mann’s cold as ice, she’s far more vulnerable on the reflective “4th of July”, where her clear-as-a-bell tone and the arrangement’s restraint (it could’ve just as easily been a standard power ballad) leave a lasting imprint. Same thing goes for “Stupid Thing”, a simple but melodically effective breakup song whose sorrow fully registers in both Mann’s front-and-center vocal and an exceptionally expressive guitar solo that practically mimics her tone.

While I doubt Mann would ever deny the confessional nature of her songs, as a narrator, she just as often inhabits characters. “Fifty Years After the Fair” makes sustained references to having lived through a time long before Mann was born, while in “Mr. Harris”, she sings, with intensive, specific detail of falling in love via a May-December romance, a scenario to my knowledge she has not personally experienced (at this writing she’s been married to contemporary/fellow musician Michael Penn for almost two decades). Burning with the just the right mix of optimism and longing for an imagined past, the former’s heavenly jangle-pop is a better fit for her than the latter’s impeccably arranged, classy-but-stuffy chamber music. But both work in her favor to suggest she’s not just all about bad breakups. “Put Me On Top” feels more personal, commenting on her languishing in record label limbo (“I should be riding on a float in the hit parade / instead of sitting on the curb behind the barricade”) but her self-deprecation (“Or at least put some hope in the bottom of the box,” she suggests as a last resort) is more relatable and applicable—pop star or not, who doesn’t want at least the promise of some sort of recognition?

Mann obviously merits recognition for Whatever’s success, but so does its producer, Jon Brion. A session musician who performed with ‘Til Tuesday on their last tour, Brion branched into production with Whatever and his touch immediately distinguishes the album from any other of its time (and also from everything Mann’s recorded since she stopped working with him after her third album.) His arrangements are like sonic playgrounds (think back to the opening of “I Should’ve Known”), favoring unconventional instruments such as calliope, Chamberlin, Mellotron and other effluvia mostly nicked from The Beatles’ post-Sgt. Pepper’s whimsy-enhanced side. Sometimes, he lays it on noticeably thick, such as the flute-and-martial drum chorus of “Jacob Marley’s Chain” or the fairground atmosphere (complete with trombone, old-timey piano and kiddie xylophone) enriching the lovely chord changes and psychedelic pastiche of closer “Way Back When”. Elsewhere, he’s a little subtler but still effective, casually dropping an up-to-the-minute drum loop into the opening of “Could’ve Been Anyone” or providing minimalist keyboard shading to “4th of July”.

As with Brian Eno and Talking Heads, or Thomas Dolby and Prefab Sprout, you sense how perfectly Brion and Mann fit together as producer and artist throughout Whatever, and they save their best for the penultimate track. From its first notes, “I’ve Had It” almost proceeds like clockwork, the percussion, acoustic guitar and piano dutifully repeating a hook soulfully, not mechanically. However, the song really comes to life at the chorus as ringing guitars and a bass harmonica make everything shimmer and glisten; the sensation fortifies the plainspoken awe of Mann’s lyrics as she reminisces about being in a band, and reflects on what she took away from it. She sings, “Oh experience is cheap / if that’s the company you keep / and a chance is all that I need / and I’ve had it.” How refreshing that the song title ends up not a declaration of weariness but a basic acknowledgement of an opportunity welcomed, challenged, tested and occurred. Thankfully, her directness is not at odds with the elegiac, intricate beauty of Brion’s production—they actually complete each other well, preventing “I’ve Had It” from seeming too cynical or, on the other hand, too idealistic.

Whatever was an act of redemption for Mann, turning her into a critical favorite (if not a commercial one). We’ll hear from her (and Brion) again on 100 Albums and discover how she confronts this conundrum by developing a persona steeped in it, while also gradually refining her sound.

Up next: Everybody else is doing it, so why can’t she?

2 thoughts on “Aimee Mann, “Whatever””