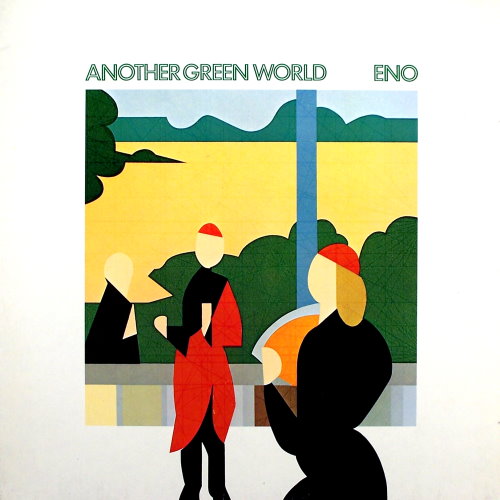 As I write about my favorite albums, one question keeps gnawing at me in the back of my mind: what is pop music? It’s a term I think I use at least once in every essay, but I’m no longer precisely certain what it actually means. Pop, obviously, is short for popular, but scan through the popular music charts of any particular era or region and you’ll find they encompass a wide variety of genres and styles. Distilled to its basic essence, pop music is often thought to be catchy, conservative, accessible, and have mass appeal. But one could just as easily bend and expand that definition, for some pop music is challenging, groundbreaking, and unusual. I’ve employed the term in referring to music that fits either set of criteria and occasionally, both—for instance,  ABBEY ROAD is one of the best selling records of all-time from perhaps the greatest pop band of the 20th century, but it’s also a record partially defined by its complexities and overall innovation.

Which brings us to Brian Eno, who was briefly a member of Roxy Music, the last band we covered here. He played synthesizer, although the word “played” seems inaccurate for he used the instrument not as a conventional keyboard, but as a means to emit the most bizarre noises he could find by twiddling various knobs. He contributed as much to the Roxy’s flamboyant look and overall sound as singer/songwriter Bryan Ferry and, after two albums, simply outgrew the band and went solo. Of his first five albums, four are commonly categorized as “pop”, if only to delineate them from nearly everything else he’s recorded as a solo and collaborative artist since, which falls under the realm of ambient music. He helped pioneer that genre with DISCREET MUSIC, his fourth album and the non-pop outlier of those first five.

Although critically acclaimed, none of the four pop albums sold much at the time. The first, HERE COME THE WARM JETS (1973) on a surface level diverges only slightly from Roxy Music’s arty glam rock (multiple songs from it appear in Todd Haynes’ phantasmagorical genre epic VELVET GOLDMINE), but it’s distinct enough: Eno alternately projects a quirkier and gentler sensibility than Ferry (he’s more of a seeker than an observer) and no one would ever mistake Ferry’s affected croon for Eno’s Muppet-like mewl. Its follow-up, TAKING TIGER MOUNTAIN (BY STRATEGY) (1974) is even further out there—full of delectably hummable melodies, Eno deliberately cloaks them within such eccentricities as an out-of-tune string section or repeating a guitar riff to the point where it achieves pure cacophony. Both albums now sound a few years ahead of their time, like post-punk not entirely free of prog-rock trappings.

ANOTHER GREEN WORLD appears the following year. Although it contains a few Eno-sung, verse-chorus-verse selections, the majority of it consists of brief instrumentals, all under four minutes long (most of them less than three). Opener “Sky Saw” sets course that AGW is a different beast from its predecessors. Actually, the bass-drum-electric piano backing would seem fairly anodyne if not for the song’s main hook, a four-note modulating electronic noise that Eno “plays” in lieu of a vocal. Obnoxious and harsh on first listen (likely inspiring the song’s imagistic title), as it repeats and gains familiarity, it begins to seem, well, not pleasant exactly, but it does what a hook does—it defines the song and draws us in. A few vocals do appear in the song’s back half, but they’re nearly an afterthought (Eno on the subject of words: “Everyone just ignores them.”). The real tension comes from former Velvet Underground-er (and future full-length album Eno collaborator) John Cale, whose viola wheeze late in the song adds an extra note onto that primary hook, providing a melodic variation and making things a little… funky, actually.

AGW’s instrumentals seem a tad ephemeral on first listen (perhaps even after five listens). Many slowly fade in and then gradually fade out, as if you’re focusing in on a telescope but have a limited stretch of time to see through the lens with total clarity. Some of them evoke a sense of awakening and discovery (the beatific title track) while others have outwardly sinister textures, like the descending, echoing guitar riff of “In Dark Trees” (possibly the granddaddy of the similar riff in The Smiths’ “How Soon Is Now”) or the foreboding wall-of-sound synths in closer “Spirits Drifting”. They alternate between structural rigidity (“Sombre Reptiles” where drowsy, distorted guitars tunefully curl over a purposely snaking rhythm) and shapelessness: “Little Fishes” would carry all the simplicity of a Satie piece if not for its wiggy, wiggly noises, while in “Over Fire Island” (which I described in my notes as “Not pop—or is it?”), a bassline, a toe-tapping beat and a noodling synth all seem to have wandered over from other random compositions.

Although Eno was quite fond of utilizing his Oblique Strategies cards during this album’s recording, you don’t need to know anything about them to discern that he was experimenting with the creative process and striving to make music that was both more intuitive and hermetic. Around this time, he said, ”If you had a sign above every studio door saying ‘This Studio is a Musical Instrument’ it would make such a different approach to recording.” AGW’s seemingly pithy instrumentals are born out of this very approach, but Eno’s melodic gift is still dominant enough to produce something like “The Big Ship”. Primarily another repetitive four-note synth motif over a shuffling, mechanical beat, it fades in like a massive sea craft emerging through dense layers of fog in slow motion. By the time it reaches peak volume, the whole thing radiates majesty, feeling at once both elated and calm. All Eno employs here is a minimal melody and the modulation of sound—in theory, it seems like small potatoes, but in practice, it’s absolutely immense.

If AGW were entirely instrumental, we might consider it Eno’s first solo ambient music effort (NO PUSSYFOOTING, his 1973 collaboration with Robert Fripp is technically Eno’s first dabble in the genre). However, those four songs with vocals (not counting the brief vocals in “Sky Saw”) suggest he wasn’t entirely ready to leave pop music behind. “St. Elmo’s Fire” and “I’ll Come Running” both could’ve easily fit on Eno’s previous two albums, especially the latter with its old-school piano triplets and playful “whoa-oh-oaahh” vocals. Both songs even have guitar solos (played by Fripp) and now scan like great lost singles that could’ve been standards had they come out five years later. The intimate, gorgeous “Everything Merges With The Night” even has a prominent acoustic guitar on it, while the more somber “Golden Hours” tempers its squirrely textures (such a tapping typewriter providing a Morse code-like rhythm) with blissful aaahs and Eno’s playfully elongated syllables (“per-haps / my / braiinnnns / have / turrrrned / to / sand”).

As one works at deciphering AGW, contrasts and patterns emerge: the prevalence of nature in the song titles versus a sonic tableau that could only come from a recording studio… how the trembling beat of the cheery “St. Elmo’s Fire” takes on a tonally distinct cast when a variation of it appears in the following track, “In Dark Trees”… the simple melody of “Becalmed” echoing the similarly austere melody of “The Big Ship”… how the mood continually swerves between contentment and trepidation, with “Spirits Drifting” concluding the album on ambiguous note, one that could either be of peace or fear, depending on how one perceives it. With such intricacies woven into its fabric, AGW is not an album most listeners would necessarily define as pop; without the vocal tracks, it may very well not be pop at all. And yet, as my taste in music has broadened with each passing year, I’ve come to think of it as pop, with the caveat that it’s not the same kind of pop music as Maroon 5, just as Mumford and Sons is not the same kind of pop as Eminem. With AGW, Eno simply stretched the definition of what pop music could contain, and it’s irrelevant whether it was actually popular or not—that it has endured to the point where I and many others are writing about it nearly 40 years later shows that, like all pop, it doesn’t exist in a vacuum. Whether through word-of-mouth or independent discovery, more listeners collectively join the conversation, and it lives on.

Eno will soon resurface in this project, alternately as performer and producer. Up next: The Journey Continues…