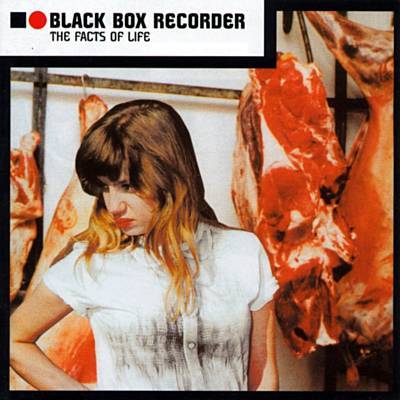 A British trio consisting of a breathy, slightly posh-sounding female vocalist backed by two nondescript male musicians, you can’t help but liken Black Box Recorder to Saint Etienne. Ah, but it’s only a superficial resemblance: in nearly every other way, the former were emphatically the latter’s negative mirror image, their evil twins. If Saint Etienne were (and still are) the cuddliest band in postmodern electro-pop, BBR were decidedly more sardonic and cutting—“Child Psychology”, the catchiest track from their 1998 debut England Made Me has a chorus that goes, “Life is unfair; kill yourself or get over it.”

BBR was the brainchild of Luke Haines, who had led mid-90s band The Auteurs and John Moore, a former drummer with The Jesus and Mary Chain. Their idea, in a nutshell, was to, a la Steely Dan and The Beautiful South wed smooth, polished, nearly antiseptic pop with cynical, pointed and often mordantly funny lyrics. Haines had the latter element down pat in his songs for The Auteurs, but his vocals and the band’s guitar-heavy palette smacked of a less sneering, intellectually-inclined Oasis (a combo that made for a more consistent oeuvre than post-“Wonderwall” Oasis, anyway.) However, in finding chanteuse Sarah Nixey, Haines and Moore hit pay dirt. Although pretty, proper and pitch-perfect, her utter disaffectedness served as an ideal vessel for BBR’s caustic, vaguely sinister pop. Like Saint Etienne’s own Sarah (Cracknell), her voice never manipulated or overpowered—it simply, impeccably emitted the words written for it to sing (or in many cases, speak) with sparkling, if artless precision.

Although England Made Me lays out all the cards in this musical approach, follow-up The Facts of Life most fully realizes it, adding layers of icy synths and gently haunting strings and placing Nixey front and center. It sounds a lot like French electro-lounge male duo Air (the stately, loping “French Rock ‘N’ Roll” pays explicit tribute to them) crossed with the socio-conscious commentary of Britpop stalwarts like Pulp. Occasionally, Haines will nod to The Auteurs by bringing in a loud guitar riff (like the perfectly mocking one on the bridge of “Straight Life”); otherwise, the album basks in an ultra-pristine glow, Nixey trilling exactly like Olivia Newton-John circa “Have You Never Been Mellow”, dutifully singing curt la la la’s and trading spoken word sections with Haines, imbuing her words with sort of a dispassionate directness that manages to both cut to the bone and just evocatively hang there in the air.

The Facts of Life opens with a triptych that seems to concern travel in modern England, but of course, that’s not all it’s about. In “The Art of Driving”, Haines says, “We can get a hood down / Throw away those learner plates,” while Nixey coolly responds, “You got the hang of steering / Now try stepping on the brakes.” Using such innuendo has consequences, however, as she detachedly sings on the chorus, “You’ve been driving way too fast / You’ve been pushing way too hard / You’ve been taking things too far / Who do you think you are?” This “journey” of sorts continues with “Weekend” as Nixey and her “best friend” escape boredom with a “drive out of the city.” The ultra-catchy chorus of “Friday night / Saturday morning,” seems innocent enough, yet her isolated asides (“Take your bank account / was it worth it?” and “Keep you guessing where we’re going”) have an ever-so-slight ominous undercurrent to them. Not as much, however, as “The English Motorway System” has: While the titular network of roads is “beautiful and strange,” it also “eliminates all diversions… and emotions,” and later, “it’s an accident waiting to happen.” And as easy as it is to zone out while zooming along it, something else is needling Nixey. Eventually, she comes out with it, revealing the road as synonymous with a relationship, at one point speaking plainly but incisively, “Do you really want to break up?”

“Sex Life” leaves metaphor behind for a laundry list of sexual configurations. In a singsong-y cadence, Nixey recites, “Boy on boy / boys on top / boys together / boys don’t stop / being boys / in your dreams” (and she also devotes a stanza to “Girl on girl.”) Her titillating suggestions, however, are a mere prelude to a chorus where she turns the inquiry back on herself, revealing, “Can’t stop thinking about you, in your dreams,” languidly extending that last word across multiple syllables. A few tracks later, “Straight Life” presents a similar bait-and-switch. With lush opening harmonies (“It’s a beautiful morning / in our dream home”) giving way to mechanical intonation of the song’s title, it all feels deliciously ironic. Still, as guitars howl over the synth-pop beats and Nixey goes on about such things as “home improvements”, she also notes, “We’re never moving” with just a hint of defiance, perhaps even advocating for this lifestyle instead of lazily mocking it.

The title track even makes the case that BBR mean it, man. The tightest and most inviting (wouldn’t necessarily call it warm) song in their catalog (and not coincidentally their only UK Top 40 hit), it opens with a simple, gradually, very nearly chill but refreshingly crisp hip-hop beat that could almost be Soul II Soul. It’s tempting to say Nixey “raps” the verses, but her deliberate monotone is neither quite that nor spoken-word poetry. “When boys are just eleven / they begin to grow in height / at a faster rate / than they have done before,” she starts off, going on to offer advice on how to call a girl on the telephone or where to socialize (and have sex) in a small town. Her professorial tone brings to mind someone who’s been there, done that and is not prone to romanticism (locales suggested for S-E-X include a disused coal mine and a bicycle shed), yet she also offers deeper asides like, “No one gets through life without being hurt,” and “Experimentation, familiarization—it’s all a nature walk.” Then, there’s the sincere, almost cuddly sung chorus: “You’re getting ideas / when you sleep at night / they develop into sweet dreams / it’s just the facts of life.” No irony, no snark, just good, heartfelt guidance and observation.

Such is the fine balancing act this band expertly walks that they can get away with it all: indulging in the Wicker Man-like freak folk fantasies of “The Deverell Twins” and the delectably wispy “May Queen”, injecting uncommon pathos into the la, la, la chorus of “French Rock ‘N’ Roll”, even Nixey concluding “Gift Horse” by repeating the lyric, “I just want to be loved,” sixteen times and holding your attention through to the very last one. On “Goodnight Kiss”, she expertly vacillates between being caring (“I’ll cradle your head in my hands”) and creepy (“check that you’re still alive”) while also managing to eke out a credibly moving love song. “Goodbye, good-niiiight,” she sweetly sings, “It’s just a goodnight kiss,” and yet her composure and near-blankness keeps it all from becoming too sweet or overtly sentimental. It’s the perfect end to a lovely night and an exceptional album.

Or at least, it was on the original UK release in May 2000. When The Facts of Life finally arrived stateside ten months later, it did so with two former B-sides added as bonus tracks. “Brutality” is a brief, laundry list of “What ever happened to…” inquiries (among them, “the fear of God” and “the South of France”) before practically praising “Good old fashioned brutality / everything in its place” with something resembling a yearning for it. “Start As You Mean To Go On”, however, is the real prize: A glam-tastic trot that kicks off with a pert, “Be My Baby” drumroll, it positions Nixey as a young woman who “learnt to be a secretary” and desires to get married with kids and then “split up when we’re twenty-two.” Of course, it’s all buildup to the glorious chorus: “If I can’t have it, NOBODY CAN! / You follow the instructions, it’s all part of the plan / when you start / as you mean / to go on.” Nixey declares these daggers over charging guitars and icy synths, supplemented by unerringly sung doo-doo-doo’s. An irresistible anti-anthem for the young go-getter who really can’t be bothered, it’s the absolute essence of BBR’s serious flippancy (or, if you will, flippant seriousness); for me, The Facts of Life is unimaginable without it.

If there’s a drawback to this band’s tightrope trick, it’s that it’s awfully hard to sustain over time. After this album, Nixey and Moore married and BBR put out two more records—2001’s odds-and-sods comp The Worst of Black Box Recorder and 2003’s Passionoia—the latter’s not bad, but it altogether plays like a lesser, if lusher retread of the first two LPs (at the very least it has amusing track titles like “Andrew Ridgeley” and “The New Diana”.) Then, Nixey and Moore divorced not long after. Despite playing some shows with sarcastic punk pop outfit Art Brut following a multi-year hiatus, BBR was officially kaput by 2010. By then, their moment had long since passed, but The Facts of Life remains one of those half-forgotten about, perfectly-formed gems awaiting rediscovery.

Up next: Return of the (career-defining) Double Album.

“The Facts of Life”: