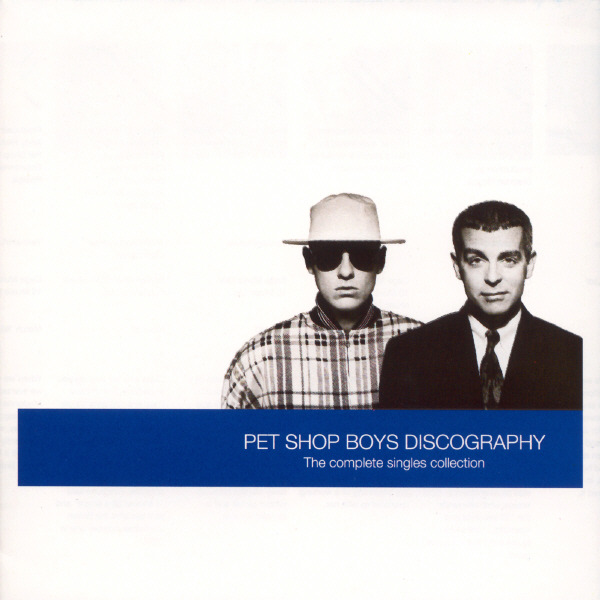 Track listing: West End Girls / Love Comes Quickly / Opportunities (Let’s Make Lots of Money) / Suburbia / It’s A Sin / What Have I Done To Deserve This? / Rent / Always On My Mind / Heart / Domino Dancing / Left To My Own Devices / It’s Alright / So Hard / Being Boring / Where The Streets Have No Name (Can’t Take My Eyes Off Of You) / Jealousy / DJ Culture / Was It Worth It?

“West End Girls” is maybe the unlikeliest number one hit of the 1980s and, at the same time, the most emblematic. It quietly fades in, ambient street noise almost immediately consumed by a ticking drum machine and a wash of synthesizers. Then, the bass gives away the song’s primary melodic hook, to be sung later when the chorus comes around. However, the verses are rapped, only this hip-hop approximation has more in common with Blondie’s “Rapture” than Run DMC or even the Sugar Hill Gang. What’s more, the rap is delivered in a slightly posh, unapologetically fey, white, British male voice, so lacking in swagger or braggadocio anyone hearing it for the first time today might struggle to even discern that it’s a rap. The sung chorus, however, is catchy enough to pull all of it—the rap, the synths, the soulful female backing vocals into focus, creating a vivid portrait of a modern, diverse London rustling with class boundaries (the “East End Boys” versus the titular figures), everything suffused with a mid-1980s urban ennui.

That this most British song not only topped the charts in the UK but also in the US was an unexpected coup for this cheekily-named duo (comprised of vocalist Neil Tennant and instrumentalist Chris Lowe), but it also must’ve been daunting to reach such great heights so early on. “West End Girls” remains Pet Shop Boys’ best-known, career-defining song, but even in the US, they weren’t exactly one hit wonders, scoring four more top ten hits within the next two years. All of them are on Discography, which plainly, dutifully collects the band’s British singles in chronological order, from 1986 to 1991. Album purists would probably find the very concept an abomination, especially as the four albums this compilation draws upon (Please, Actually, Introspective and Behaviour—the Pets love their one-word titles) are all worth hearing, and diverse enough to carry the same weight in the band’s overall, um, discography. Regardless, in this case I prefer the greatest hits simply because, taken altogether, this is a brilliant run of singles, both consistent and far-reaching enough to stand with any other of the decade.*

In their singles immediately following “West End Girls”, PSB almost resemble a synth-duo equivalent of Steely Dan in how they wed hummable melodies and arena-sized pop hooks with knowing (if not quite as pitch-black) satire. “Opportunities” spells out what a calculated, lucrative game pop music is with bell-like clarity (and insider knowledge—Tennant, after all, was formerly a journalist for Smash Hits magazine), exemplified by that killer chorus, “I’ve got the brains / you’ve got the looks / let’s make lots of money.” Meanwhile, “Suburbia” appears period-iconic to the degree where it could easily soundtrack any John Hughes film, although Tennant’s pleading to “blame the color TV” (among other things) forgoes any sweetness about the suburbs, staying coolly observant while retaining a point of view that could only come from lived-in familiarity with the milieu. Still, it’s telling that “Love Comes Quickly”, the UK follow-up to “West End Girls” was a flop. This had nothing to do with the song’s quality—it’s actually aged better than the singles surrounding it and is one of the band’s own favorite songs to boot—but its utter sincerity and unabashed awe at the Power of Love may have thrown listeners for a loop at the time (especially those used to hearing such advice from the likes of Huey Lewis and the News).

With the singles from Actually (1987), PSB elevate their status from exceptional to era-defining. They accomplish this primarily by subverting the very notion of what a pop song can contain and express, often concealing its true meaning under layers of irony, allowing for multiple, conflicting readings. Musically, “It’s A Sin” is “West End Girls” on crack, ramping up the urgency to disco-era “I Will Survive” levels, wringing grandiose drama out of something as elemental and omnipresent as Catholic guilt. In the first verse, Tennant reaches across the entire spectrum of sinful admissions: “When I look back upon my life / it’s always with a sense of shame / I’ve always been the one to blame.” However, in the second verse, he sings, “At school they taught me how to be / So pure in thought and word and deed / They didn’t quite succeed.” Again, the lyrics are just broad enough to be open to interpretation, but consider the phrase “pure in thought and deed”, along with Tennant’s foppish demeanor. Watch the video, directed by Derek Jarman, for god’s sake. Even without knowledge of Tennant’s homosexuality (he’d publicly come out around the time of Discography’s release), it’s not difficult to discern what one of the sins, or perhaps even the biggest one Neil’s singing about is—that is, if you’re attuned to it. In 1987, “It’s A Sin” might not have become the band’s second UK chart topper had these lyrics been more explicit and less coded.

For the next two years, Tennant and Lowe could seemingly do no wrong with the record-buying public while sneaking in a depth of heady content not commonly found at the top of the pops. “What Have I Done To Deserve This?” revivifies ‘60s blue-eyed soul icon Dusty Springfield, giving her an up-to-date glossy ‘80s sheen while expertly complementing her perennial strengths as a vocalist and mere presence. The resulting girl/boy duet between her and Tennant, sung in the guise of ex-lovers, startles for how smashingly their two disparate voices go together (today, it’s also drily amusing for the fact that Springfield was also closeted at the time). “Domino Dancing” delves into Latin freestyle, going so far to employ Lewis Martinee, producer of chart-topping girl group Expose. Gleefully piling on live horns and flamenco guitars over a tart electro backdrop, the track exploits a then-hot trend, but it’s far more sophisticated and complex than the stuff it draws from, and its video’s slight homoerotic bent further muddies just who the song is about and whom for.

Even on relatively simpler compositions such as “Heart” (written for and rejected by Madonna!) and a radical, electrodance cover of the Elvis Presley/Willie Nelson chestnut “Always On My Mind”, PSB continue to push boundaries and make great pop music by appealing as much to the mind as, well, the heart. This apotheosis reaches an early peak on “Rent”. A gently percolating ode to transactional love and affection (“I love you / you pay my rent,” the indelible chorus goes), it seems like nothing more than that on first listen, a personal equivalent of the professional relationship proposed in “Opportunities”. The decidedly heterosexual video supports this reading, but come on: the title alone conjures up thoughts of the term “rent-boy” for a specific swath of listeners. It’s just as likely Neil is singing about a gay relationship as a straight one, or a prostitute/john one, or even a dominant/submissive combo. As its gleaming synth pop helps to wash everything down easily, the song’s carefully-chosen lyrics suggest that even the most genuinely loving and equal relationship is not entirely devoid of transaction, whether it’s monetary, nurturing or taking shape in the form of, say, compromise.

As PSB slipped off the US charts for good (“Domino Dancing” was their last top 40 hit), their ambition skyrocketed. Introspective (1988), a club-centric LP with an average track length of six-minutes-plus conveys this, especially on “Left To My Own Devices”. Helmed by uber-producer Trevor Horn (ABC, Yes, The Art of Noise), it’s purposely baroque, overstuffed with strings (both fake and real), dramatic harp glissandos and enough drama for an entire opera. Even with the single edit slashed down to just under five minutes from the eight minute LP version, you sense PSB applying this kitchen-sink approach to a pop song simply because they can. Behaviour (1990) leaves behind the club for the cinema. Among its three selections, “So Hard” might be as hummable as “Heart” and constructed from the same string-synth stabs found in “Always On My Mind” but it also substitutes lovesick plentitudes for musings one might find in an existentialist noir or maybe even an Antonioni picture (“We’ve both given up smoking / cause it’s fatal / so whose matches are those?”); alas, even a silver screen might prove too small for “Jealousy”, a slow building lament forever threatening to transform into a lachrymose Broadway showstopper, which it kind of does with its sudden, massive orchestral fanfare outro.

These are all terrific songs, but none of them are as touching, eloquent or simply perfect as the remaining Behaviour single, “Being Boring”. Another lengthy, lushly orchestrated mid-tempo ballad, it announces a far more mature and refined PSB. The song’s narrator reflects on being young and “find(ing) inspiration in anyone who’s gone and opened up a closing door.” From there, he’s off to find himself, having “bolted” past that closing door; change is inevitable as the decades fly by, but as he notes in the chorus, at least “we were never being boring / we had too much time to find for ourselves.” Not until the third verse, however, does he reveal the song’s true agenda: “All the people I was kissing / some were dead and some are missing / in the nineteen-nineties.” It’s no stretch to read this as an AIDS elegy, one made all the more haunting and resonant by the following lines:

“I never dreamt that I would get to be
The creature that I always meant to be
But I thought in spite of dreams
You’d be sitting somewhere here with me.”

For a band often accused of being too clever or arch, this is powerful stuff—sentimental, yes, but deeply felt. The masks PSB tend to cloak their songs in aren’t fully lifted—AIDS is never mentioned by name—but “Being Boring” is a key turning point in their discography, although Discography itself tapers off somewhat after it. Following another wacky cover only notable for setting a magisterial U2 standard to a sequencer rhythm and mashing it together with a Frankie Valli oldie, we get two new, previously unreleased songs, both promoted as singles around the compilation’s release. You may not remember them because neither is in the same class as “West End Girls” or even “Domino Dancing”.

Still, they’re each significant for another reason. “DJ Culture” extends Behaviour’s fixation on dancefloor decadence and after-hours melancholia and once again returns to the spoken verse/sung chorus well. Dreaming of “living in a satellite fantasy” but struggling to articulate what that actually means, it’s cerebral to a fault, almost: in the final verse, Tennant raps, “Bury the past, empty the shelf / decide it’s time to reinvent yourself.” On “Was It Worth It?”, he elaborates further, claiming, “I reserve the right to live / my life this way and I don’t give / a damn when I hear people say / I’ll pay the price that others pay.” He sings this defiantly, triumphantly over an euphoric disco-house beat—it’s a grand moment of release, of coming clean, feeling miles away from the conflicted narrator of “It’s A Sin”. Concluding Discography with these two particular tracks is no arbitrary decision (even relegating “Miserablism”, one of their sharpest songs from this era, to a B-side): thematically, it neatly closes one door for PSB and bolts open another. As we will see some entries on, this action will prove tremendously liberating for Tennant and Lowe, arguably encouraging/allowing them to create their very best work.

Up next: Really Deep Thoughts.

*Madonna, the era’s greatest singles artist, bar none, doesn’t appear on 100 Albums because even her best compilation, The Immaculate Collection is flawed, excluding great songs and substituting inferior remixes and edits of others.