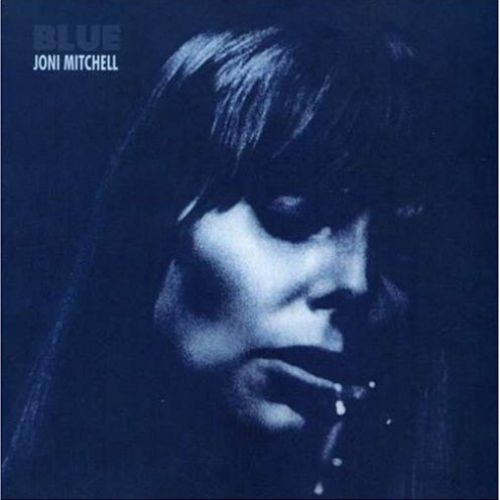 Track listing: All I Want / My Old Man / Little Green / Carey / Blue / California / This Flight Tonight / River / A Case Of You / The Last Time I Saw Richard

“The work of art stays the same but by staying the same it ages—and changes.” – Geoff Dyer, Zona.

In my early twenties, I moved from Milwaukee (where I was born and raised) over a thousand miles east to Boston. I arrived in my new city on a sweltering, late August Saturday afternoon. Physically ill (a bad cold) and profoundly disoriented (waking up to news of Princess Diana’s death the following morning would disorient me even more), I had what I could check or carry with me on the plane: one large suitcase, a backpack, and a garment bag. My stereo and 500+ CD collection (plus furniture and other assorted possessions) would not arrive for another three weeks; in the meantime, I had to make do with a dozen or so dubbed cassette tapes I brought along to play on my Sony Walkman.

As I slowly acclimated myself over those first few weeks, I listened to two of my cassettes repeatedly. One of them was Joni Mitchell’s BLUE (the other one we’ll get to much later in this series). I had checked it out of the library the previous year, but struggled to fully connect with it; not helping matters was that I first played it while working as a desk receptionist, as the environment didn’t allow for much close listening, which the album requires. Hearing it on headphones, however, was an entirely different experience, although that wasn’t  the only factor—my age and particular situation (moving across the country, alone, to a place where I knew no one) also account for why I took to BLUE so strongly during that period. Feeling exhilarated and somewhat terrified at what I had gotten myself into, I easily identified with Mitchell’s sparse confessionals; it rapidly became a significant part of my soundtrack as I explored Boston’s unfamiliar, seemingly devil-may-care web of streets.

What first struck me about BLUE and still startles me to this day is Mitchell’s candidness. Even without all the rumors or hearsay about whom these songs are about (exacerbated by Mitchell’s high-profile dalliances with the likes of Graham Nash, James Taylor (who plays on two tracks) and others), you immediately sense they’re personal anecdotes more than invented tales. Her tendency to write in first-person lays the foundation for this, and the attentive, sharp details she sprinkles throughout her lyrics further supports it. For all I know, she didn’t live out any of these scenarios—nice as it would be to believe, how likely is it that she actually drew a map of Canada on the back of a coaster with a guy’s face sketched on it twice, as she sings in “A Case of You”? While the reality of this and other moments relayed in BLUE more likely fall somewhere between autobiography and fiction, what matters is how well Mitchell sells such details and situations. It’s hard to imagine Dionne Warwick or even Dusty Springfield convincingly sing a lyric as open and raw and honest and self-immolating as “I’m so hard to handle, I’m selfish and I’m sad / Now I’ve gone and lost the best baby that I ever had” (from “River”). With Mitchell, however, you believe and accept every word of it.

Her conviction in part comes from her emotional connection to these songs. With her voice always front and center in the mix, she’s a storyteller but also a protagonist, a tour guide and a confidant, lending each song personality and intimacy. She’s alternately optimistic and yearning (“All I Want”), wistful and regretful (“Little Green”), lamenting and exploratory (“Blue”), editorial and celebratory (“California”), lustful and devotional (“A Case of You”)—and often subtly shifts back and forth between multiple emotional shadings. Think of the redneck she met on a Grecian isle in “California”: “he gave me back my smile,” she happily notes, before revealing, “but he kept my camera to sell,” with just a hint of sarcasm and self-deprecation, as if to say, “oh yes, I was duped, but wasn’t it fun?” On the title track, surveying her generation’s malaise, she notes, “Everybody’s saying that Hell’s the hippest way to go, well I don’t think so,” before slyly adding, “But I’m gonna take a look around it though.” With Mitchell, you start to think not everything in a three-minute pop song has to be in black-and-white. Her upfront presence and kind but cunning persona gives us something to hold onto, allowing for nuances in her lyrics to surface at both opportune and unexpected moments.

BLUE was Mitchell’s fourth album. Musically, it’s not radically different from the first three (although the albums following it would be)—on most tracks, Mitchell is only accompanied by a guitar or a piano, occasionally adding a second guitar (“California”), a brief snatch of backing vocals (“This Flight Tonight”) or percussion for rhythmic support (“All I Want”). The song with the lushest arrangement was naturally the album’s single: “Carey” frames its ebullient character sketch with a basic acoustic guitar/bass/drums palette but much of its charm comes from the sweet counterpoint backing vocals that appear in the chorus and later verses. Still, for all its simplicity, Mitchell’s early work is often challenging to get into due to the complexity of her melodies. If anything, those melodies are even more intricate here, but beginning with her previous album LADIES OF THE CANYON, Mitchell became more adept at shaping her songs. On BLUE, she’s confident in doing so to the point of remarkable fearlessness. “River” provides an entry point by quoting the melody of “Jingle Bells” but inserts it so seamlessly that it registers but doesn’t obscure the song’s primary melody. The title track seems utterly shapeless in theory, eschewing any sort of verse-chorus-verse structure, but you don’t even question how it proceeds because every piece just seems to fit together. “The Last Time I Saw Richard” has an instrumental intro that may be unconventionally lengthy, but it sets an indelible mood that resounds throughout the song’s remainder as Mitchell recalls a former lover with fondness, cynicism, and resolve.

“Former lover” is a good way to sum up how I presently feel about BLUE. I can’t help but identify it with a part of my life that now feels of another era, albeit one that lasted long after my first year in Boston. A decade ago, when I first compiled and ranked my one hundred favorite albums, I placed it at number 2; if I ranked them today, I doubt it would make the top 50. That’s not to say I no longer love it—apart from “My Old Man” (which has aged as poorly as you’d expect with that title), BLUE mostly holds up due to its timeless sound and Mitchell’s arresting, unique perspective. It arguably set a template for generations of female singer/songwriters and you can easily imagine it having as powerful an effect on a teenager or young adult hearing it for the first time today. However, I think being young and open enough is key—I discovered BLUE at a time when I was most susceptible to it. Nearly two decades on, my life has changed considerably (as most lives do). While I still appreciate BLUE, it now feels almost anticlimactic—I’ve heard to it so often, I know it by heart, and thus, it contains little left for me to unearth. It’s also somewhat disembodying—as it plays, I can’t help but remember the person I was back then and strain to reconcile him with who I am now. As did Mitchell, who promptly left this template behind, her subsequent albums a series of bold stylistic leaps that eventually led to the record of hers I now value more deeply than BLUE. But that’s a few entries away.

Up next: Popular and Genius need not be mutually exclusive terms.

“The Last Time I Saw Richard”: